Land administration refers to the process of determining, recording and disseminating information about the relationship between people and land. It is a wide field; the focus in ISO 19152:2012 is on land administration concerned with rights, responsibilities and restrictions affecting land (or water), and the geometrical (geo-spatial) components thereof.

Land administration systems are concerned with geo-spatial data (e.g. land parcel boundaries), as well as with non-spatial data, such as information about people and relationships among people. In some jurisdictions, the relationship between people and land, e.g. the ownership right to land, has legal status. Such rights are often registered with the purpose of assigning legal meaning to the registered right.

The LADM is organised into three packages (Party, Administrative and SpatialUnit) and one sub package (Surveying and Representation). A (sub)package groups related classes into a single unit. The model is represented in UML. Figures below provide an overview of the main classes and associations in the four packages. 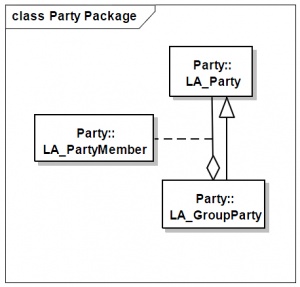 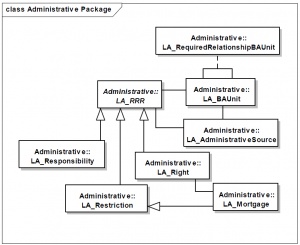 The classes in the Surveying and Representation package represent information about surveys and point, line and surface representations of spatial units (LA_Point, LA_BoundaryFaceString, LA_BoundaryFace). A survey is documented with one or more spatial sources, such as a registered survey plan or aerial photograph. Point, line and surface representations can be acquired in the field (e.g. with classical surveys or through the GNSS), or be compiled from other sources, such as field sketches and orthophotos. The representations of spatial data conform to the spatial schema described in ISO 19107:2003, Geographic information – Spatial schema. 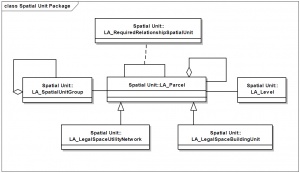 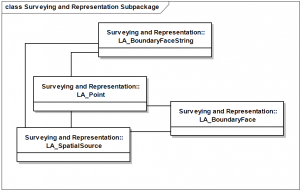 Level 1, 2 and 3 compliance requires the relevant classes of a package to pass the conformance tests specified for those classes in ISO 19152:2012. For example, the following table lists the classes indicated as level 1 in the different packages. If the classes in an application schema pass all the tests specified in ISO 19152:2012 for the Party, Administrative and Spatial Unit classes in Table 10.44, the model is said to be Level 1 conformant for the Party, Administrative and Spatial Unit packages. An example of such a conformance test for LA_Party is to ensure that the application schema contains at least one class conforming to the definition of LA_Party and has all mandatory attributes and association roles of LA_Party specified in ISO 19152:2012. Conformance tests are performed by examining the application schema.