There are many different ways to encode imagery, gridded and coverage data because of structural complexities (e.g. square grids, hexagonal grids, quad trees, TINs or Thiessen polygons), traversal methods for sequencing grid cells (e.g. linear, Morton, spiral or Hilbert), distributing attributes over a space, interpolation, break lines, sensor information, geo-referencing, look-up tables, metadata, compaction and compression. There is also different and even contradicting terminology between specifications, such as the terms ‘imagery’, ‘raster’ or ‘matrix’. The result is the legacy problem of needing to deal with many old, but still very relevant, datasets in different formats.

ISO/TS 19129:2009 does not attempt to provide a new, universal format to replace the existing ones. Rather, it provides a framework for understanding the critical aspects of these formats and how imagery, gridded and coverage data fit into the general feature model used in the ISO 191xx series of standards. Further, ISO/TS 19129:2009 provides template application schemas for different types of imagery and gridded data.

A feature is the fundamental unit of geospatial data and is defined as an “abstraction of real world phenomena”, that is, something in a database representing some identifiable thing in the real world (or the imaginary world: as planned, as envisioned, as speculated, as simulated, as fancied, etc.). Traditionally, the concept of a feature might have been applied only to vector data, where a feature had spatial attributes (geometry, possibly with multiple representations), non-spatial attributes (including multimedia), a classification or feature type, topological relationships to other features (intersection, containment, adjacency, etc.), logical relationships to other features (compound features and associations), symbology (suitable graphic representations of the feature) and metadata.

A coverage could be a raster image, polygon overlay, digital elevation model, Delaunay triangulation, triangulated irregular network, or Lidar point set or cloud, for example. The real benefits of considering both vector-type data and coverages as features is that it facilitates mixing them together in the same datasets, models and databases, and allows for a single application schema.

For the user wanting to understand better the nature of imagery, gridded and coverage data and the formats used for such data, Clauses 5 to 8 inclusive of ISO/TS 19129:2009, and ISO 19123 (see above), will be most useful. They provide details of:

In addition, Clause 7 of ISO/TS 19129:2009 provides the framework for imagery, gridded and coverage data, that is, how they fit in the general feature model. It caters for five patterns or types of coverage, for which template application schemas are provided in Section 10:

Section 7 includes the diagram in the figure below to show the packages from the ISO 191xx suite of standards that are applicable to imagery, gridded and coverage data.

Imagery, gridded and coverage data can be described at an abstract level (see ISO 19123:2005 Geographic information - Schema for coverage geometry and functions), a content model level (application schema, type of coverage, spatial referencing, portrayal and metadata) and an encoding level (such as XML, BIIF or JPEG2000). Data compaction is part of the content model level while data compression is part of the encoding level. 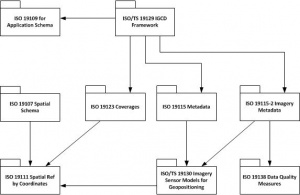 The five templates in Section 10 are all structured similarly and are straightforward to interpret, if one understands the different types of imagery, gridded and coverage data. They cater for aspects such as interpolation method, sequence type, scan direction, dimensions, axes, break lines (for TINs), domains and ranges.

Annexes B and C are very brief and describe use cases and portrayal.